by admin
3 months ago

A few weeks ago in October, much of the Ethereum community came together in South America as we reunited for Devcon VI in Bogotá, Colombia!

Today we want to say Thank You(!) to every attendee, volunteer, and contributor that made Devcon VI a success. In this blog post, we will recap the highlights of an incredibly fun event, and reminisce about Community Hubs, the Road to Devcon, insightful talks and panels, beautifully designed presenter rooms, and much more.

Watch the Recap Video to refresh your memory and enjoy the Devcon VI vibe!

What Devcon is all about

For those that are new to the Ethereum family, Devcon is the only annual conference held by the Ethereum Foundation, and it dates back to a small meetup in Berlin (ÐΞVcon-0) about a year prior to Ethereum’s first blocks. For some members of the Ethereum ecosystem, Devcon is a family reunion of sorts, while for others it’s a large stage on which to speak to (and learn about) the latest breakthroughs on content ranging from technical research to application releases and more.

Over the years, it has become clear that Devcon serves the community in other ways too. As we planned for Devcon VI, we worked to define those goals. Now we want to describe them once more and reflect on how we tried to accomplish each of them.

Devcon is not only a conference that features presentations, but it’s a unique place to get some work done with so many crucial builders in the same rooms. This year, we wanted them to have space to talk, to pull up to a whiteboard, and get to work together.

At Devcon VI we hosted workshop rooms, dedicated co-work areas, bookable meeting spaces, and a hacker basement where people came together to meet and work. We also offered a co-working space after the event in the venue.

Devcon is a chance to learn, and to teach. People traveled to Devcon to understand the cutting edge in the Ethereum space, and to share what they have learned over the last year with a large audience both at the event, and online.

Over the four days, 60,000 viewers around the world watched the Devcon livestreams (21,780 on the first day alone). Providing quality live streams and videos was crucial for Devcon Satellite Events – educational meetups around the world organized for those who couldn’t make it to Bogotá. The community organized Devcon Satellite Events in Argentina, Bolivia, Colombia, Malaysia, Portugal and Turkey.

Community Hubs were dedicated spaces powered by the community for the community. Whether you started your day with a cacao ceremony in the Regens Hub, you went anon IRL by crafting a mask in the Temporary Anonymous Zone, witnessed the launch of the first Token Engineering Fundamentals program, or visualized your values about decentralization in the Design Hub, we hope that you felt more like a member of a diverse community than simply an attendee.

This was also the first Devcon that featured “Impact Booths”, which were spaces reserved for teams and efforts making a positive impact on Ethereum and the ecosystem at large. Great things happen when clients, rollup-teams, and other impactful groups come together in one place. Allegedly rivalrous rollup teams became friends, others won a rare Gitcoin plushie by revealing their favorite public good, some snagged a pair of the first ever socks.sol swag, or accepted the challenge of exchanging as many ENS POAPs as they could with other attendees to climb the leaderboard.

The Latin American community had its own creative space: a Colombian Chiva Bus. There, participants hosted discussion rounds, podcasts, and kept the music going until well after presentations had wrapped for the night. The ETH Latam team in front of their Chiva Bus

3. Use our biggest stage to send a message

Devcon is a critical opportunity to communicate with the world about Ethereum. As the largest conference in our industry, the broader technology space and mainstream organizations pay attention to Devcon.

Devcon VI was the first after The Merge took place in September of this year! 🐼Ethereum Mainnet now uses proof-of-stake for consensus, and Danny Ryan talked about how busy the last few months have been for the Ethereum core devs, what difficulties they faced when they merged the consensus and execution layers, and what it means that they exist as one chain – Ethereum.

Other talks that are highly recommended to (re)watch are Aya Miyaguchi’s talk about Executing with Subtraction in the Infinite Garden, Kurt Opsahl’s talk The Value of Cryptocurrencies in Supporting Human Rights, and Pia Mancini’s talk The Future is Collective.

Apart from our recommendations, we also want to let you know what were some of the favorite picks by members of the community this year: “Dogfooding” is the practice of using one’s own products or services. Devcon is a conference made by and for our community, and we want to make use of tools built by our community where possible and beneficial to attendees. Devcon wants to enable attendees to learn and experiment first-hand with products built on Ethereum.

Beginning with ticketing, 268 people participated in the on-chain raffle and auction before the general ticket sale began.

Smart Token Labs helped to make Devcon VI ticket attestations a reality, which allowed attendees to attest that they were Devcon VI ticket-holders without a wallet address or other personal identifying information being made public. Through their platform, separate third parties offered permissionless perks exclusively for Devcon VI attendees.

Speaking of dogfooding, how did you book your hotel in Bogotá? Attendees were able to pay for their rooms using crypto, thanks to Winding Tree.

You can now watch all talks and panels from Devcon VI on more open and robust platforms too – Swarm and Etherna helped us to make the Devcon Archive more decentralized by hosting the videos from talks and workshops. Check out the Swarm team’s recap for more information on their work at Devcon VI.

Many environmentally conscious attendees offset their flights with the carbon offsetter by Discarbon. As of now, participants have contributed to offset the equivalent of 403.9 Tonnes of CO2. Voters on the snapshot proposal chose to retire these credits from the Cordillera Azul National Park REDD+ Project in Perú.

And it goes without mention that everyone collected a lot of POAPs along the way. 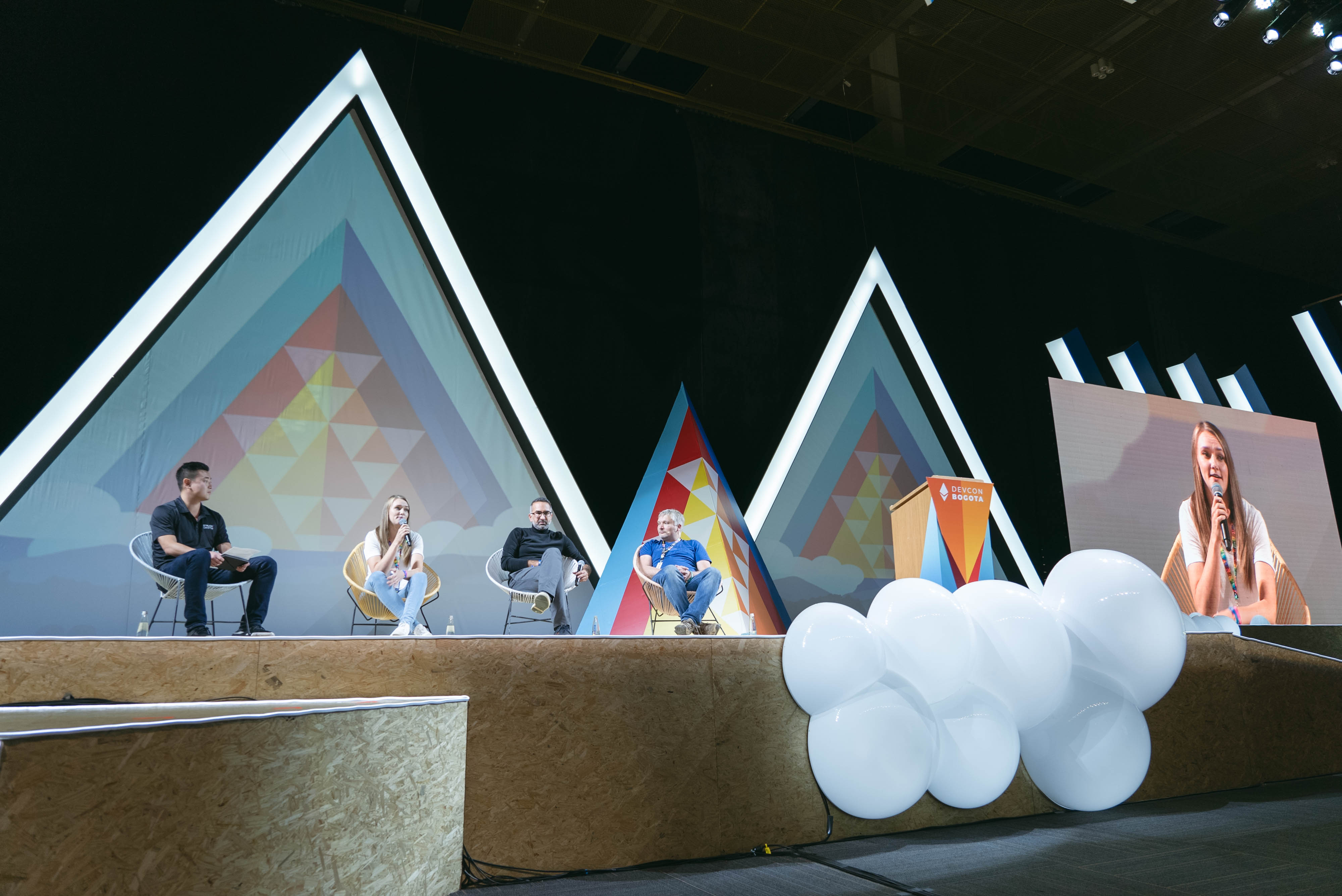 Panel: Signing in With Ethereum: the Most Powerful Protocol in Web3? – Photo by Shintaro Yoshimatsu

We believe Ethereum can have real-world impact in South America, and it is amazing to see how strong the Latin American Ethereum community has become.

EF’s Executive Director Aya Miyaguchi recently said that she “strongly believe[s] it’s important for builders to go out there and see all different parts of the world they are trying to change.” Some Devcon attendees used the opportunity that the event provided to explore South America a little further after Devcon. They came to know a community and part of the world that was previously foreign to them, or they arrived earlier and followed the Road to Devcon. The Road to Devcon map

Devcon is also an opportunity to reach blockchain-related teams and newcomers from other industries. UNICEF was once more a guest and speaker at Devcon, as well as Arkadiy Kukarkin from the Internet Archive, and geopolitics and technology author Bruno Maçães.

Ethereum Foundation’s Next Billion team organized a one-day event for Devcon attendees, government officials, non-profit and civil society organizations, and “anyone interested in learning about how we can use Ethereum as a public good destined to help billions of people coordinate and thrive.” The event focused on the ‘real-world’ factors faced by those who use Ethereum to create impact.

The programming track Opportunity & Global Impact featured many more interesting talks and panels discussing how Ethereum can overcome “gaps in representation across cultures, nationalities, and economic classes.” (Next Billion)

Devcon VI welcomed many people that are newer to the Ethereum ecosystem and that attended Devcon for the first time. With other programming tracks like Governance & Coordination, and Cryptoeconomics, and with a lot of crypto art and music along the way, we hope they felt inspired by our amazing community by the week’s end.

Growing the Ethereum ecosystem also means supporting those who “have the potential to make a positive impact on Ethereum and its community, but who were unable to attend without financial assistance.” The Devcon Scholars Program had its second class this year, and 50 individuals got support to attend Devcon. Read some of their stories and their perspectives on Devcon VI here!

Playfulness has always been part of Devcon and of the Ethereum ecosystem at large. This is why Devcon swag is colorful, Jonathan Mann is singing The Merge Song on stage, and the opening video features animated dancing bears merging into a panda representing Ethereum.

Calling Devcon a conference misses the mark in light of the colorful stages designed with love for detail, the adult playground with games like giant Jenga, and the hacker basement full of digital art to explore. Many of the fun things Devcon VI offered were brought to life by the community itself. The music stage in the Chiva Chillout was a community initiative that was born from a Devcon Improvement Proposal (DIP) by The Fellowship of Ethereum Musicians that turned into a larger project. You can watch a video with highlights from all four days here. Each day, attendees could join a graffiti tour organized by CRYPTOMURALS, and the teams of Social Dist0rtion Protocol and daedalus industries puzzled out the Treasure Hunt Challenge “Time To DAI” for you. We are always trying to learn and improve as well, and we thank everyone who gave us valuable feedback (you can still give feedback via our attendee survey and earn a POAP.)

There are a few things we learned this year. Wi-Fi was an issue again, especially on the first day, and we know there is room for improvement, and our SIM cards for attendees were more vital than ever! The food can be even more versatile – including better vegetarian and vegan options. Female, Transgender, Non-Binary and other genders made up 20%+ of Devcon VI’s attendees. Still, we can do more to make both Devcon and the ecosystem more representative in terms of gender diversity & inclusion in a still-male-dominated space.

As our event has grown larger and with over 6,000 in attendance, we recognize that the chances are greater for contention between some attendees. The first rule in the Devcon Code of Conduct is to “be excellent to each other”, and our commitment is to create a comfortable environment for all. We will review our CoC and consider improvements based on what we have learned this year.

We are confident we won’t have to wait three years for the next Devcon. It’s already time for you to get involved by proposing ideas to improve Devcon.

Aya’s talk about subtraction made us reconsider the phrasing of DIPs. Devcon Improvement Proposals are now intended for collaborative community input on what should be changed (subtracted, added, or modified) for the upcoming Devcon7.

Where will Devcon7 take place? In short: We don’t know yet. But the choice will be hard, as we have many incredible suggestions for Devcon7 locations from members of the Ethereum community.

We hope that you’ll be as excited as we are when we share more information in the weeks to come. For now, thank you once again to all of our attendees for joining us in Bogotá, to the presenters, the Impact teams, Supporters, Community Hub organizers, DIP contributors, and volunteers that made Devcon VI possible. ❤️🦄